Barriers go up at the London Stadium 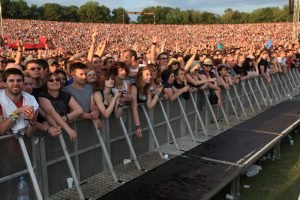 Crowd safety barriers will go up on the walkway in front of the director’s box at the London Stadium before Saturday to prevent a repeat of the protest that marred the West Ham v Burnley match. One disabled season ticket holder told KUMB.com that they have been moved from their normal seat to allow the erection of barriers to block off the walkway in front of the owner’s box.

Met Police officers will also be in present inside the London stadium for the remaining five home games to prevent any breach of the peace.

The event security company who were awarded the contract to protect the pitch from invaders is expected to lose their contract.  There will also be a significant increase of safety stewards for Saturday taking the number in excess of one thousand stewards from companies G4S, Wise Security, Experia and CSP who provide the event stewards for Stadium Operator London Stadium 185.

Further security measures will be place for Saturday including further segregation of the concourse area to restrict free movement around the stadium.

3 comments on “Barriers go up at the London Stadium”