Bilic gives his view on result against ‘Boro 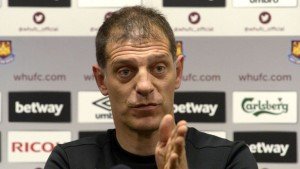 Slaven Bilic declared himself happy to end the losing run of games but unhappy not to have taken three points from the game against Middlesborough.

Speaking after the game he said: “We were looking for three points but the boys showed character, spirit and quality. That’s what I demanded and that’s what they gave me.

“As I say we are not happy with the result but we are not playing the football we should to create chances although it was good in terms of spirit and character.”

He explained that he had been pleased with Michail Antonio’s performance in a central strking role saying: “I have not been happy with the performances of our strikers and Antonio has the pace and power to play the role which he did well.”

He hailed Dimi Payet’s goal as “unbelievable” saying: “It was of the highest possible quality and you certainly don’t see many like that but in relation to this match it was of incredible importance.

“That was what you need from your top players – moments of the highest quality.

“However, with due respect to Middleborough we wanted three points but having said that, in terms of the Premier League every point is incrediby important.”

15 comments on “Bilic gives his view on result against ‘Boro”