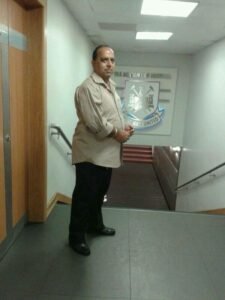 Brave West Ham supporting NHS worker Amrik ‘Bob’ Bamotra lost his battle with the virus after he had tested positive.

Hammer Bob, who worked as a radiology support worker at King George Hospital in Goodmayes, was a loving husband and father of two whose wife and son also work for the NHS at Barking, Havering and Redbridge University Hospitals NHS Trust. Son Harry said his father was a hardworking family man who made everyone happy.

“He was always positive about everything he did,” his son said. “He was a loving husband, father, grandfather and loved and cared for all his family and friends.

“There’s not a time when we can say he wouldn’t go that extra mile to do something for anyone to make sure they were happy!

“He had always been a hard worker. He had touched so many people’s hearts with his personality, which has been shown to us through messages we have received.

“Working in the MRI Department at King George Hospital as a support worker meant the world to him! He loved going into work every day and 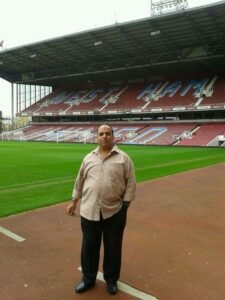 was always happy to see his colleagues. Dad was one of those people that if he saw you in the corridor at work he would stop and make sure he had a chat with you.”

Born in India, the 63-year-old moved to east London as a youngster, settling in Hamilton Road in West Ham, just a short distance from the Irons’ historic former Memorial Grounds and Hermit Road homes. It was while living there that Bob fell in love with the Hammers while watching FIFA World Cup and European Cup Winners’ Cup heroes Bobby Moore, Geoff Hurst and Martin Peters in action in the 1960s and 1970s.

“Dad was a lifelong West Ham fan from as long ago as I can remember,” recalled Harry, who himself worked at the Stadium Store. “His love for players like Bobby Moore, Martin Peters, Geoff Hurst was something he would always tell me about.

“He loved playing in goal and was really keen on Phil Parkes. I remember him telling me that every time he played football, he would always be in goal or in defence!

“I remember very well sitting watching the last game at Upton Park against Manchester United with him at home. Even with the delayed start to the game, and him knowing he had to work early the next morning, he stayed up and watch the whole thing right to the end. It was special. 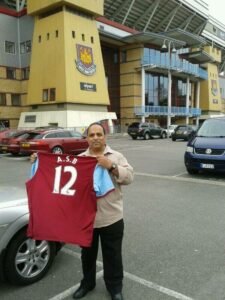 We took him on a tour of the Boleyn Ground in April 2014 for his birthday, as we’d decided to give him something a bit different, and he absolutely loved it!

The family has set up a fundraising page in Bob’s memory for King George Hospital and Queen’s Hospital in Romford. If you would like to make a donation, please click here.

Claret and Hugh are saddened to learn of Bob’s untimely death and send add their heartfelt condolences and sympathies to Bamotra’s friends and family.