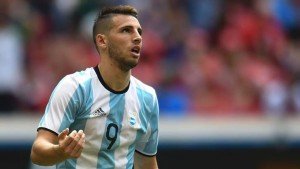 West Ham has officially confirm a deal has been agreed to sign Argentinean striker Jonathan Calleri on a season-long loan, subject to international clearance. A loan fee and personal terms have been agreed with Calleri and his club Deportivo Maldonado and the 22-year-old is expected to arrive in London next week.Manager Slaven Bilic says the capture of Calleri “We have agreed to sign Calleri,” he said “Unfortunately for him, but good for us, Argentina were knocked out of the Olympics this week, so he should be here with us pretty soon, depending on the work permit.”
“We did the deal a little while ago, and he is a top striker. You need a squad, of course, but it is all about the balance. I think we have a good balance.”
Permalink