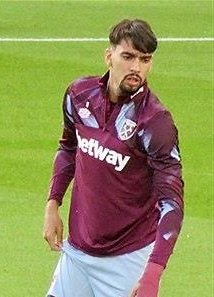 Lucas Paqueta has been ruled out of the game against Manchester United at Old Trafford on Sunday although hopes remain that his injury is no worse than has been revealed.

The player explained on his Instagram that his upper chest and shoulder were painful but that there were no broken bones although at one stage it was thought his collar bone may have been damaged.

However, a scan showed that not to be the case and the player was hopeful he would be back sooner than many had speculated.

Manager David Moyes also revealed that despite early worries there was now confidence that the midfielder would be back in action soon.

However, Claret and Hugh has learned from a key source that any return is set to be decided by a consultant and that Paqueta is not due to see him/her until next Tuesday which clearly rules him out of any Old Trafford appearance.

← Silkeborg clash could bring seven changes
Silkeborg: Are they any good? →
Click Here for Comments >