Posted by Sean Whetstone on May 2, 2017 in News, Whispers 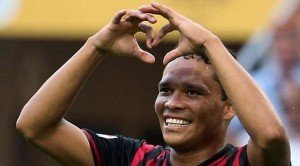 According to TransferMarketWeb, former West Ham transfer target Carlos Bacca has again been targeted by Arsenal ahead of the summer transfer window.

Bacca has scored 13 goals in 29 Serie A appearances this term but it’s claimed he’s likely to leave the San Siro in the Summer. The 30-year-old is under contract until 2020 but could reportedly be sold for just £15m (€18m).

However, a rival story on www.calciomercato.com claims West Ham will again battle it out with Valencia for his signature in the summer. He also has interest from China but is reluctant to move to the Far East claiming he is not motivated by money.

West Ham made a take it or leave it offer to the South American last summer as he dithered over his future at AC Milan. We allegedly offered £25m before turning our attention to Andre Ayew after receiving no reply from the Colombian’s representatives.

Last summer Bacca claimed that a number of clubs from across Europe are interested in his signature but said he wanted Champions League football. AC Milan is expected to again put Carlos Bacca up for sale when the transfer window opens.