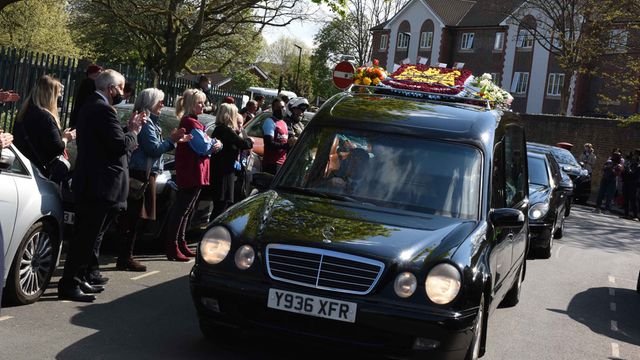 As many as two hundred people applauded the founder of a Newham children’s charity on the day of his funeral.

The father of four set up AAA in 2016 after having co-founded the Canning Town-based charity Community Links in the late 1970s.

Well-wishers wore claret and blue and sang  I’m Forever Blowing Bubbles in recognition of the life-long West Ham fan, who died on April 7 at the age of 62.

Bubbles were blown from among the crowd as the hearse, which was topped by West Ham’s crest, passed. The cortege paused outside AAA’s base Arc in the Park on its way to a private family funeral which was led by Canon Ann Easter.

The applause lasted for 10 minutes, with members of AAA staff and former colleagues from Community Links among the throng outside Terence Brown Arc in the Park. Jenkins worked as a councillor for 28 years after first being elected to Greatfield ward in 1986 and then East Ham South ward in 2010.

At the service, Canon Easter even wore claret and blue robes in tribute to  West Ham.

West Ham United’s anthem played as mourners filed into the North Chapel at the City of London Crematorium for the service.

A fund has been set up at the request of the family, instead of flowers, which to date has seen more than £6,000 donated to AAA.