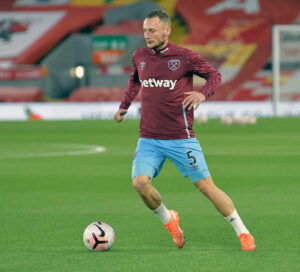 They huffed and puffed but in the end were undone by a Calvert-Lewin goal for which Craig Dawson has to take some  responsibility and a brilliantly organised Toffees defence.

And the next result was that our Champions League hopes took a sickening blow from which we will do very well to recover.

Any hopes that we would replicate the pulsating performance against Burnley at Turf Moor were quickly thwarted early in the piece when the Hammers could never get their counter attacking game going .

And when Dawson found himself on the wrong side of Calver-Lewin from Sigurdsson’s straight ball into the edge of the area that – as they say – was that.

Benrahma spurned a tremendous chance to equalise when heading wide with all the time in the world from Fornals ball in before Fabianski was forced to make two fine saves.

The Hammers dominated possession in the second half but the ball went forwards and sideways far room much and only looked like scoring when Couval hit the inside of an upright.

Everton brought on Josh King towards the end and his first contribution was to bead against a post.

The Hammers continued to press forward but that Toffees defence was always on top of some timid attacking from the Irons.

It left us in fifth place but five points away from the top four. Hope springs eternal with three games to play but there will need to be some strange twists and turns at this stage of things.