Diop needs his ‘General’ back 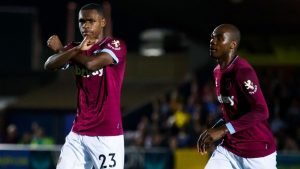 Issa Diop struggled against Huddersfield this afternoon – a big surprise given his amazing level of performance since arriving in the first team.

The Hammers were very quick to snap up the young French defender last summer and it’s been easy to see why as he has turned in top performance after top performance.

He’s a top player who had a very rare bad day at the office.

At 22 years old the former Toulouse defender has been near faultless and I am writing this only because the criticism of him on some forums has already started.

It needs to stop because the boy has been brilliant this season and he’s allowed one bad game surely.

As a result of Diop’s form today Angelo Ogbonna’s dipped and hopefully we may well see the young man reunited with his former defensive partner Fabian Balbuena against Everton.

Amazingly, Diop has made 34 appearances in the first team and today – for the first time – looked leggy along with Declan Rice.

Both need a rest but with our squad so skinny neither are going to get it this season. Hopefully next season we will have cover for Rice, perhaps in the shape of Chilean Gary Medel and Winston Reid back to take his turn when required.

I have nothing but admiration for Diop who at a relatively young age has arrived from France and settled in to the manner born.

With The General back for the game against Everton I think we will see a very different performance from him.

4 comments on “Diop needs his ‘General’ back”