Fans telling Sullivan: ‘Don’t do it’ 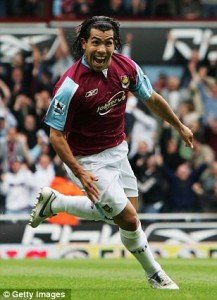 West Ham co charman David Sullivan has been sent a near unanimous “don’t do it ” message from West Ham fans over the attempt to re-sign Carlos Tevez.

Sullivan revealed yesterday  (Wed) that he had offered Carlos Tevez a package in excess of £150k a week to rejoin the Hammers.

But the former hero claimed that despite a long proclaimed view that he loves the club he would want around £250k to come back.

And in a poll from ClaretandHugh readers which has attraced narly 1,000 votes in just a couple of hours – our biggest ever response, the fans have given the whole idea a massive thumbs down.

Sullivan questioned the Tevez love for the club which is clearly being reflected through the fan base.

7 comments on “Fans telling Sullivan: ‘Don’t do it’”