Flop could have gone elsewhere

West Ham flop Albian Ajeti has explained that he could have joined Lazio but had a “gut feeling” to move to east London.

The striker joined the Irons from Basel in 2019.

The Irons paid around £10m to bring him in from the Swiss side, but he only lasted a season before moving to Celtic. 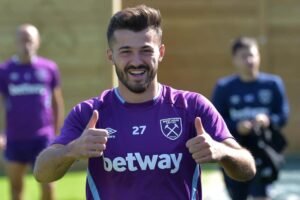 In total, he played 12 times for the first-team but did not manage to score a goal, nor did he provide an assist.

Even during his time with Celtic, he only managed nine goals in 48 games, and is now on loan at Sturm Graz in Austria.

A Switzerland international with 11 caps, Ajeti has now explained that he could have joined Lazio, whom Sturm Graz are currently preparing to play in the Europa League group stage.

Speaking in an interview with Kronen Zeitung, he said: “There were talks (with Lazio). In the end, it was certainly not a decision against Lazio, but my gut feeling advised me to go to West Ham.”

Ajeti was actually prolific at Basel before moving to West Ham, as he scored 43 goals in 96 games for the club, but the scoring touch has deserted him in recent seasons.