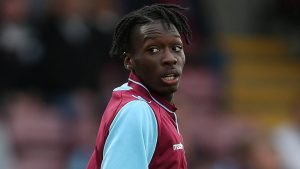 A former Hammer gambled £16,000 at a Mayfair casino using a stolen card, a court has heard.

Ex-West Ham winger Blair Turgott is accused of withdrawing the cash before exchanging it for chips during a night at the Playboy casino in central London’s Park Lane.At the end of the night, Turgott cashed out £16,900, leaving with a £900 profit, Southwark Crown Court heard.

Prosecutor Kaj Scarsbrook said the card used by Turgott had earlier been stolen from Peter Dixon by a fraudster posing as a bank employee.

He told jurors: “Somehow the card and its details ended up in Mr Turgott’s possession. The prosecution say that in itself is suspect, as is using someone else’s card to fund your gambling.”

Turgott, wearing dark trousers and a brown jacket over a white shirt, appeared in the dock at London’s Southwark Crown Court, where he denies fraud and converting criminal property on the night of Friday September 30 2016. The court heard the victim was called by a fraudster earlier that day posing as a Barclay’s Bank employee, who said he needed to collect Mr Dixon’s debit card so a new one could be issued.