Hammer to make his debut fight

Posted by Sean Whetstone on July 4, 2017 in News, Whispers 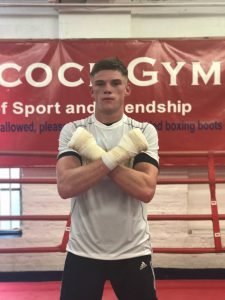 Hammers fan Sean Phillips will make his professional boxing debut at the Copper Box in London this Saturday 8 July.

The West Ham supporter told Claret and Hugh he has been a Irons fan for as long as he can remember telling us this evening:

“I’ve supported West Ham for as long as I can remember, my dad was never interested in football when I was young so my uncle Andy saw an opportunity to make a little Hammer out of me!  He took me to my first game at Upton Park and got me my fist kit. I haven’t been to a game in the new stadium yet but will be up there once this fight is done and out the way.” 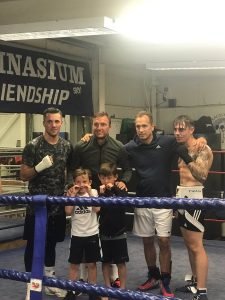 In preparation for the fight, the boxer welcomed skipper Noble to his training camp at the renowned Peacock Gym in Canning Town.

“Mark said he would like to come and watch me train a while back,” McNess told WHUFC.com. “I sent a broadcast message on WhatsApp asking if anyone wanted to come and support me in the fight and he replied saying he wanted to buy four tickets, so he will be there on Saturday.

“There will be a lot of support for me and it’ll be very noisy. When I was in the ring at the Copper Box for my last fight, everyone was singing Bubbles and obviously the venue is right next to our ground, so it’s a 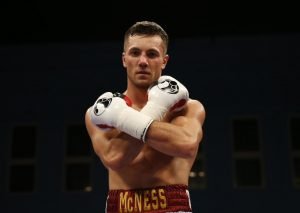 great place for me to fight!

“Mark then messaged me again asking if he could come down to the gym, so he came down and spent about two or three hours with us. He’s such a nice person and it’s great to have his support.”

“For a childhood Hammers fan, having the Club captain in his corner is something to be proud of.”

Let’s hope both Hammers fans come out on top this Saturday!
#COYI
Permalink