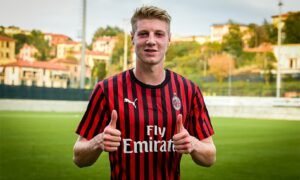 West Ham have enquired over the availability of AC Milan midfielder Marco Brescianini according to a report from Calciomercato.

The Italian has already turned 20 but he has yet to make his competitive senior debut for AC Milan.

He has impressed many in the youth side where he has played in both the central and defensive midfield positions.

He has scored seven goals and made one assist from 14 appearances for the development team this season.

The player has four years remaining on his contract so it could depend how much the Italians want for him.

Brescianini typifies the type of young hungry player Moyes is looking for, a player with potential that might be a bit of a gamble but relativity cheap.

As the video of him in action below shows, as an AC Milan youth player he is used to playing games with no supporters so he could feel right at home playing behind closed doors.