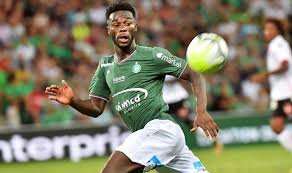 Saint-Etienne’s exciting midfielder Jonathan Bamba has become a target for the Irons – according to The Sun..

The 21 year old has been a target for Huddersfield and Palace but he is now apparently wanted by the Irons whom it is claimed want him to sign a pre-contract with his deal running out at the Ligue 1 side in the summer.

Although Huddersfield may go in for the player again, the Hammers are set to become aggressive in their approaches as Saint-Etienne want to keep their France Under-21 star.

The player  joined Saint-Etienne as a 15-year-old and, has scored six goals and added four assists for Les Verts this season.

Saint-Etienne are currently 13th in Ligue 1.

Meanwhile West Ham have temporarily promoted performance analyst Jordan Miles to the recruitment role held by Tony Henry, who was axed after comments on African players.