West Ham are eyeing a potential £1m swoop for Paddy Lane, according to the print edition of the Daily Mirror.

The Fleetwood Town midfielder is said to be attracting interest from a number of clubs, including the Irons. 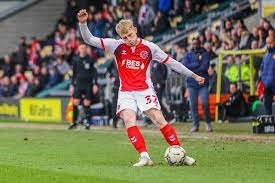 They claim that West Ham have sent scouts to watch Lane in action but interest is now growing in the 21-year-old.

Cardiff and Hearts are both said to be keeping a close eye on the youngster, after he won the League One Young Player of the Season award.

Lane is also a full international after playing for Northern Ireland at senior level.

He has made 37 appearances in total for Fleetwood and has scored five goals while also registering eight assists.

Lane would be a cheap addition and one who could be added to the U23 squad for regular football while also providing depth in the first-team.

It remains to be seen if he will believe a move to the Irons will benefit him.