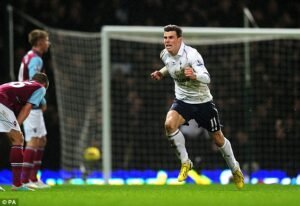 The Irons – with Aaron Cresswell and Arthur Masuaku set to be looking after the left hand side of the pitch will likely be the first pair to face the threat of the returning Spurs Welshman from Real Madrid.

It will be his first appearance in their colours since leaving the club seven years ago after falling out of favour completely at the Spanish giants.

How match-fit the bloke is remains to be seen and whether his debut means a place in the starting eleven we will only know at around 3.30pm tomorrow afternoon after he spent the international break attempting to get to get thoroughly tuned up at the club’s training ground.

If there is ever a good time to be confronted by the guy this is probably it as he is unlikely to be 100 per cent and may indeed only come on as a sub thoroughly tuned up.

Mourinho – discussing the 31 year old’s possible involvement – said: “Of course he wants to play. He wanted to play since the day he arrived, but it was not possible.

It would be a surprise if there was any change in the Hammers team which scored a hugely impressive victory over Leicester City although Issa Diop could feature after returning to training with, of course, David Moyes in the dug- out after a period of self isolation.

← Ten short weeks until it all starts again!
Video: The very best of Benrahma →
Click Here for Comments >