Posted by Sean Whetstone on October 17, 2014 in Whispers 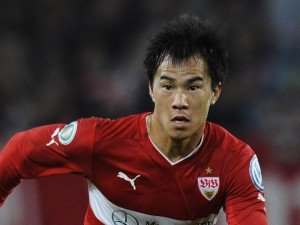 FSV Mainz 05 star striker Shinji Okazaki is being chased by the Hammers, according to German media.The German newspaper Bild has reported that scouts from West Ham were spotted watching him at his last match.

Okazaki has scored five goals this season for Mainz who fifth in the Bundesliga league.

The Japan International is contracted at the club until the summer of 2016 but the German side could be tempted to cash in for the 28 year-old in the next window if the right offer is made. Mainz could accept offers for around 8- 10 million euros.

In the last year, the number 23 has scored 39 goals in 79 games – averaging a goal every other game.