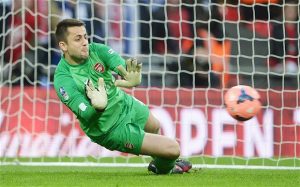 Lukasz Fabianski’s standing as a Hammer reached heroic levels last night behind a defence which didn’t look as though it had been introduced to each other.

Three or four totally outstanding saves – one of which was world class – were quite out of this world before he recovered from a terrible boot in the face which laid him out before he rose to carry on.

Declan Rice has been brilliant all season but personally I see Fab as a real challenger for the Hammer of the Year title.

At £7 million he was been the buy of the summer and for most of us I reckon his performance last night will live long in the memory despite a Hammers display otherwise only memorable for all the worst reasons.

He received so little cover from his defence that it was entirely frightening at times but afterwards he gabe his own assessment of the match and an awful result.

He said: “We’re very disappointed, especially conceding from the set pieces. I think that’s a part of the game  you work on and prepare. We could have been a lot better when it comes to defending them.

“We’re very disappointed because that has given them a massive advantage. We got punished for being sloppy from set pieces.

“You hope that you can get something out of the game. It didn’t happen today and, to be honest with you, I think the better team won. We have to work harder and be better for the next game.”

“Since the Arsenal game, when we won, something happened to us. I think it’s a mental part of the game where maybe we feel that everything is going to be fine and we’ll have a nice run until the end of the season.

“I think the reality is, if you feel like that, then you’re going to get punished. That’s what has happened in recent weeks and we need to start being more focused on what we are doing during the training sessions and during the games. We just need to really go for it.”