How to watch tonight’s Hammers clash at Goodison

Alan Irvine will again be on the touchline for tonight’s fourth round Carabao Cup tie at Everton tonight  as manager David Moyes continues to self-isolate after testing positive for COVID-19 last Tuesday.

This gives Irvine the assistant boss the opportunity to oversee a hat-trick of victories since he found himself No 1 in the dugout as the Hammers looking for a place in the fifth round of the League Cup.

Sadly the game isn’t available on the general broadcasting channels but you can catch the action which will be  streamed live by the EFL in the UK only.

Match passes are available for £10 by clicking here. Prices are set by the EFL, who are managing the service. 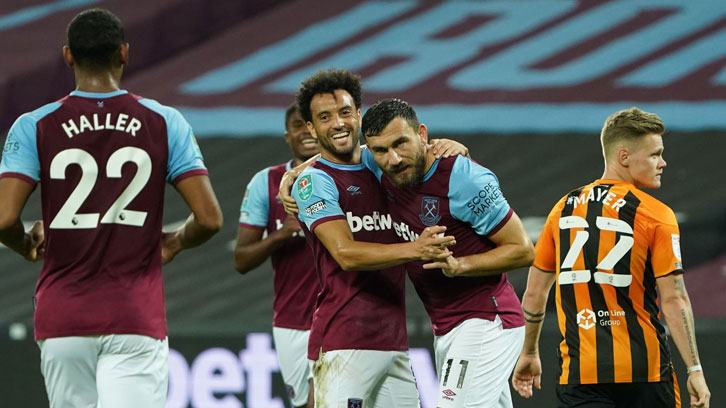 Irvine has been responsible for seeing the team win 5-1 against Hull City in the last round and followed that with an amazing 4-0 win over Wolves as the team has started to look in truly brilliant nick.

With Stuart Pearce in the stands taking instructions over the phone from Moyes things really couldn’t have gone any better. 100

The Irons have reached this stage after beating EFL League One side Charlton Athletic ahead of the Hull game with the Toffees overcome League Two club Salford City and League Two side Fleetwood Town.

Both clubs are seeking heir first-ever EFL Cup triumph, having reached the final in 1966 and 1981, but lost to West Bromwich Albion and Liverpool respectively.

The tie must be settled on the night. If the scores are level after 90 minutes the winner of the tie will be decided by penalties immediately. There will be no extra-time played.

The Goal Decision System (HawkEye) will be in operation for this fixture, but there will be no VAR.

The winner of Wednesday’s tie will qualify for the quarter-finals, with that tie to be played on either 22 or 23 December 2020.

David Moyes continues to self-isolate after testing positive for COVID-19 ahead of the third-round win over Hull, as do defender Issa Diop and midfielder Josh Cullen.

Ryan Fredericks is also ruled out after suffering a left hamstring injury in Sunday’s Premier League win over Wolverhampton Wanderers.

For Everton, defenders Mason Holgate (toe) and Jarrad Branthwaite (ankle) are out, as are midfieler Jean-Philippe Gbamin (Achilles) and striker Cenk Tosun (knee).

However, summer signings James Rodriguez, Allan, Abdoulaye Doucoure and Niels Nkounkou are all available and could be includedd.

The Blues have won all five games they have played this season – three in the Premier League and two in the Carabao Cup – and already look to be benefitting from the summer signings of Colombia midfielder James Rodriguez, Brazilian anchor man Allan, Senegal midfielder Abdoulaye Doucoure and young French left-back Niels Nkounkou.

The game kicks off at Goodison Park at 7.45pm

← Report: Hammers up interest in Swedish centre-back
“Oh Arthur”…in praise of the unlikeliest of heroes →
Click Here for Comments >