In-form Carroll gears up for Everton 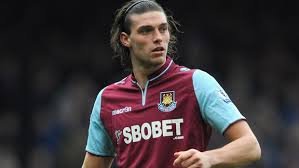 Andy Carroll’s amazing strike against Swansea should have sent shivers through an Everon defence which will clearly need to be at its very best to cope with the big fella at the Boleyn tomorrow night (Tues).

The man himself counted it among the best he has ever scored and has his mind very much on Wembley as a top league position this term as a result.

Carroll’s growing confidence is demonstrated in the larger number on interviews he takes on these days having always been very retiring in the past. It’s good to see !

He said: “There’s nothing better than a cup run for everyone involved at West Ham and I feel this is the season where we could go a long way in it.  We’ve had a good run this season, so why can’t we carry that on in the FA Cup?

He told www.wg “I thought we could have won the other day (at Everton) and we were unlucky at the end when we conceded. But all the lads are looking forward to the replay and hopefully getting through to the next round.”

Carroll claimed his fourth goal of the season against Swansea and said: “It was a good goal, one of my best, and it was a great time to score just before half-time.

“They piled the pressure on us at the start of the second half and made us work because they’re a great team at keeping the ball.

“But they didn’t really cause us any problems and I thought we could have won the game.