Posted by Sean Whetstone on April 8, 2016 in Videos, Whispers

There is a West Ham song called ‘ True, True Claret & Blue’ which was recorded in Basildon Studio by John Summerton and Mitch Horner.

Claret and Hugh caught up with John & Mitch to ask them about their Hammers song. 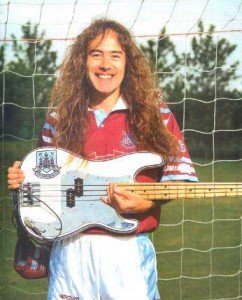 Mitch told us: “People started to ask me what inspired our West Ham song. I am  a committed West Ham season ticket holder with my family and it all began in the “ Chicken Run “ or East stand as its officially known

We have our season tickets  close to the away side end of the chicken run which is where the West Ham faithful give it big time in song to all away supporters and the atmosphere is electric every game. Being a professional musician and a passionate West Ham supporter I decided it was my time to write and record a new song to mark our move to new stadium and leaving of our old one. It took some time but eventually I came up with a riff and chorus that I thought would be catchy which I played it to my great friend John Summerton who then came on board and we recorded a demo which we played to West Ham supporters who loved it instantly.  I then played the demo to Steve Harris of Iron Maiden, a big hammers fan who gave it his blessing and said to get it done properly so after many hours of hard work in the Studio John and I finally finished it and then invited a crowd of die-hard West Ham fans to come in to sing the chanting chorus for us which was a great day.”

“We now hope to release it as a vinyl Single and a CD Single to mark our new beginning and era for West Ham. In no way are we trying to take Bubbles away from being our official West Ham anthem but as supporters I just think it would be great to have another great chanting hammers song.”

← Irons snub Chelsea ‘star’
Leroy: ‘It will be a classic and we can edge it’ →
Click Here for Comments >