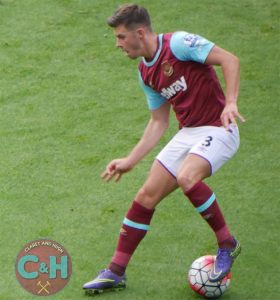 Aaron Cresswell could be a summer departure should the Hammers receive offers of £15 million plus for the left back.

The club has denied that stories of Everton interest which claimed an incredible £25 million move to Goodison could be on the cards but should offers come in during the summer David Moyes will listen.

The former Ipswich defender and Hammer of the Year has been used as a central defender this season and has possibly lost some form during a season of struggle.

He would join Chicharito, Sam Byram and possibly even Winston Reid in a Moyes plan that would see the first team entirely reshaped at the back in particular.

The club have a transfer kitty of around £60 million available which could be boosted to closer to £100 million with departures of a couple of first teamers.

Chicharito appears likely to leave given the Moyes preference for a more physical approach whilst he would prefer a big defender at the back and may feel the time has come to call time on Cresswell assuming the right offer is made.

One comment on “Irons may entertain summer offers for defender”