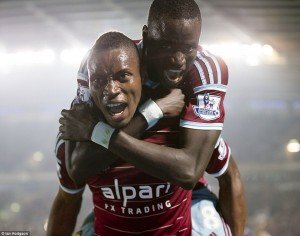 Diafra Sakho and Chiekhou Kouyate will leave for the African Nations Cup ahead of the game against Swansea on the 10th of January next year….if selected by Senegal.

Although the competition doesn’t start until the following weekend, ClaretandHugh has learned that  the Irons will wave goodbye to the pair, should they be included in the squad, as they head for the Senegal training camp ahead of the clash in Wales.

The pair – who were both involved in the weekend qualification victory over Egypt in Cairo – are expected to be included in the squad which will see them head for the Equatorial African training camp during the first week of January 2015.

However, word is that Alex Song is unlikely to be in the Cameroon party which makes its 17th appearance in the Finals with the Senegalese appearing for the 13th time.

A Hammers source said: “Diafra and Cheik look certain starters so there’s mixed emotions as far as we are concerned. It’s good to have top internationals in the club but of course there’s a price to be paid!

“They will leave before the Swansea game and return after elimination although at worst they could miss four games against the Swans, Hull, Liverpool and Manchester United (should they make the Final).”