It could be Declan’s big year! 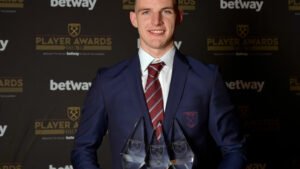 Declan Rice is on target to be named the 2020 Hammer of the year if a poll of nearly 1,500 Claret and Hugh readers is anything to go by.

This morning wee asked West Ham supporters we asked for your Hammer of the year with just 11 days of the season remaining.

Before football was suspended Angelo Ogbonna was the runaway leader the Hammer of the YEar award with Rice in the runner up position and Robert Snodgrass in third.

Rice is now pulling over 37% of the vote with Ogbonna trialling on 31% and a late surge by Michail Antonio in third with 26% after six goals in July. Everyone else in the squad is 2% or less.

Last season the star player won the acclaim of his teammates with the Players’ Player of the Year award, of supporters with the Individual Performance of the Season award for his match-winning display against Arsenal, and of Academy Manager Terry Westley with his third consecutive Young Hammer of the Year award.

Rice has made 37 appearances in all competitions this season with all 35 Premier League games and two FA Cup matches.

One comment on “It could be Declan’s big year!”