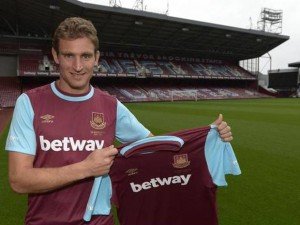 Nikica Jelavic has completed his move to Beijing Renhe it has been confirmed by West Ham Chairman David Gold today.

The 30-year-old Croatia international  made just one Premier League start this season under Slaven Bilic.

Jelavic signed for West Ham for an initial fee of  £2m from Hull in August 2015, but has scored only once in the league despite making 12 appearances from the bench.

West Ham are thought to have received a fee of between £1.5m and £2m for the striker while Nikica will be receiving £60,000 per week earning over £9m during his 3 year contract to drop down to the Chinese second division.  Jelavic’s departure is claimed to free up as much as £55,000 per week off the wage bill.