Sam Allardyce has confirmed Kevin Nolan is a major doubt for Tuesday’s clash against the Gunners after picking up a hamstring injury against Liverpool.

Big Sam  “Kevin Nolan is our problem at the moment. He came off with a hamstring against Liverpool, obviously that’s one that we have to be very careful about. It’s unusual for Kevin to sustain a muscle injury, I think it’s the first of his career, but we’ll be very careful about how we handle him. Kevin is going to desperately want to play, so we’ll probably wait until tomorrow to see how he is. Nearly everyone else is fit and raring to go. We’ll pick a team that we think suits playing against Arsenal at the Emirates to go and get a result.” 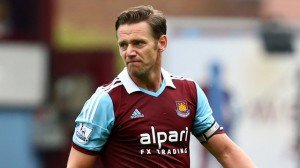