Lyon president Jean-Michel Aulas has made an absolutely savage comment about West Ham after the club sold Lucas Paqueta to the Hammers.

The Irons confirmed the club-record deal to sign the Brazil international on Monday, having pursued his signature throughout last week. 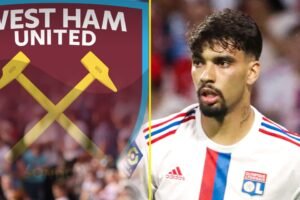 Aulas is a famously outspoken president and he has revealed that he expected the playmaker to move to a “big club” instead of making the move to east London.

Paqueta has previously been linked with the likes of Spurs and Arsenal and Aulas now says that he was only sold to the Irons because the 25-year-old was so desperate to leave the Ligue 1 outfit.

Speaking to Canal+, as quoted by The Daily Mail, Aulas said: “It is unfortunate that Lucas Paqueta is leaving. But he wanted to leave.

“We thought we’d have very big clubs come in, we didn’t have them. We then were forced to speak at the last minute with West Ham.”

West Ham have now completed eight signings this summer and there remains the prospect that boss David Moyes could look to further strengthen prior to the end of the transfer window later this week.