Maiga booed off in France 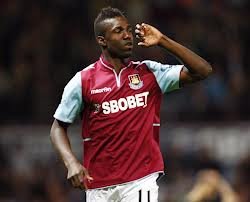 Modibo Maiga’s nightmare is continuing at FC Metz after a couple of dreadful seasons with the Hammers.

The striker was booed out of Rennes’ Saint-Symphorien stadium on Saturday evening with yet another lack lustre display.

Reports from France reveal that he managed just a 46 per cent successful pass rate and was unispired in movement and deflections which left the Metz supporters deeply frustrated.

He was finally subbed eight minutes from the end of the game and remains short of pace after his lack of games. Metz, from whence of course the hammers captured goal machine Diafra Sakho remain without a goal in two games.

Maiga is on a season-long loan with Metz and will have just a year left on his Irons contract should he return next summer.