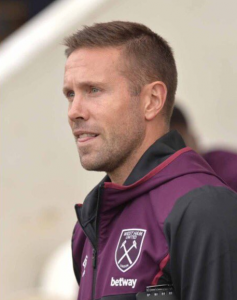 Matthew Upson has rejoined West Ham in a coaching capacity to help out with the Academy youngsters.

The former Hammers captain was spotted last night in West Ham training gear at Colchester with a notepad under his arm. He is understood to have a part time role with the Academy.

Upson has kept close contact with the club and was allowed to train with the Under 23’s in January this earlier year.

Upson joined West Ham as a player in January 2007 from Birmingham City after being sold by their then managing director Karren Brady. He agreed a four-and-a-half-year contract with West Ham with them paying Birmingham £6m rising to £7.5m with add ons

Birmingham City’s manager Steve Bruce later claimed that he did not want to sell Upson, but was forced to do so by Brady. Upson suffered a calf injury less than 30 minutes into his West Ham United debut, a 1–0 defeat against Aston Villa. He then lasted just 11 minutes of his comeback match before coming off injured against Spurs in a 4–3 loss at the Boleyn Ground in March 2007.

Following West Ham’s relegation from the Premier League in May 2011, new manager Sam Allardyce confirmed that Upson would leave the club when his contract expired.

He made 145 appearances in a West Ham shirt.

The news comes one day after Jack Collison confirmed his return to West Ham coaching the Under 14’s and Under 16’s.   Collison posted on social media “ITS OFFICIAL!!!… So excited to say that I will be returning to West Ham as Lead U14/u16 Coach… At the age of 16 I arrived at the club as a boy with a dream… At 25 I left a man, having lived that dream and experienced every emotion you could ever imagine… At 28, I will now give my all to help the next generation with the same dream I had”