Midfielder could end his career at West Ham 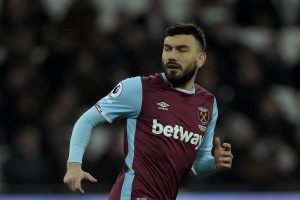 Thirty two year old Robert Snodgrass could easily end his career at West Ham despite suggestions that the age factor may be kicking in.

Manuel Pellegrini is a big admirer of the Scot who is on a deal until 2021 and has a year’s option which could even take him beyond his 35th birthday.

Although Snoddy has made only two appearances for the club this season he is certainly ahead of Jack Wilshere and Carlos Sanchez in the manager’ thinking and is bound to get games this season.

Last year he made a total of 39 appearances demonstrating that he still had a lot to offer after having been farmed out to Aston Villa under Slaven Bilic.

There were suggestions that Manuel Pellgrinin would be looking at the form of his numerous midfield options and perhaps make a decision on offloading one or two in the January window.

But Snodgrass is unlikely to find himself in that position given his ability to affect games off the pitch whilst be admired by the manager as a dressing room influence.

A London Stadium source declared: “There now seems little doubt the manager – as he has said at various times – now has the squad he wants and January departures are not foreseen.”