David Moyes has confirmed that there remain doubts over Nayef Aguerd and Gianluca Scamacca ahead of Friday’s clash with Brentford.

The Hammers go into the game in desperate need of a win. 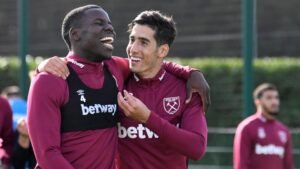 The Irons were beaten 3-1 by Arsenal on Boxing Day, extending their run of defeats to four successive games.

That has ratcheted up the pressure on boss Moyes, with the club now sitting just one point above the relegation zone.

Scamacca and Aguerd were both missing from the clash with the Gunners and Moyes has now confirmed that there is no guarantee either will start against the Bees as they look to climb the table.

Speaking ahead of the London derby, Moyes told reporters, via Football.London: “Gianluca has done a little bit of training, so we will see on him. He is probably lacking a bit of match practice. Nayef is still coming back from illness, which we’re trying to get him over. He’s done a few days training, I don’t believe he’s quite ready yet.”

Aguerd was a star for Morocco at the World Cup, playing superbly throughout the tournament as his country reached the semi-finals, but he did sustain injury issues while in Qatar and is continuing to recover, to the Irons’ chagrin.