West Ham hope that Angelo Ogbonna will be available for the final games of the run-in and, potentially, the Europa League final.

The Hammers are set to face Eintracht Frankfurt in the first leg of the semi-final next week. 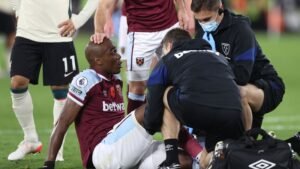 However, the Irons have been struggling with defensive injury woes in the last few days.

Issa Diop has been ruled out for the remainder of the season while Kurt Zouma is also unlikely to feature again.

Ogbonna hasn’t played for the club since November, when he sustained an ACL injury against Liverpool.

He has returned to light training and was in France when the Irons beat Lyon, although he was not named in the squad.

The Italy international is continuing to work on his fitness and there is a feeling that he could be available for the final couple of games of the season.

If West Ham do manage to beat Frankfurt and set up a final against either Rangers or RB Leipzig, Ogbonna could be fit enough to start the final in May.