Despite having little of consequence to do, David Martin’s appearance between the sticks this afternoon  saw a new confidence sweep through the team.

It was long overdue and it required Manuel Pellegrini to accept that this is one signing that he shouldassign to the dustbin of history.

And frankly, I can’t see anything other than ‘end of career’ after he was forced to sit on the bench while the No 3 keeper took over. 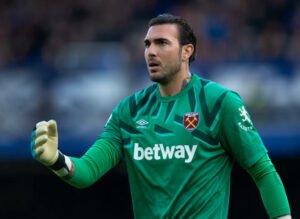 That this resulted in a victory for the Irons against one of the country’s top teams is on the face of it extraordinary and there can surely be no way back for the Spanish stopper.

It will also be interesting to see whether the manager and his director of football Mario Husills  – should they of course still be at the club – decide that they need another No 2 or will stay with Martin in the transfer widow.

Afterwards Pellegini revealed the heart-searching that had gone on ahead of making the decision to switch the keepers.

He said: “It was a very difficult decision. Of course it’s difficult because it’s a position where you must be very careful when you change it.

Lukasz Fabianski was our best player last season and Roberto had the chance to come in for him, but we needed a reaction and that was the reason.

David Martin had never played before in the Premier League, but I think he did very well. He had the personality to play, and I think our defenders helped him a lot to keep that clean sheet.

His Dad is a West Ham legend and I’m happy for him that the first game was so successful. I’m hope this will now be the start of our recovery as a team.”