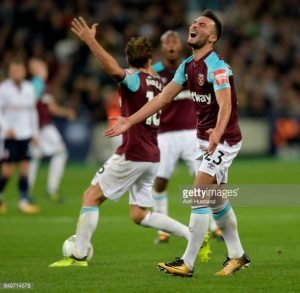 Manager Manuel looks to have taken be giving an extended opportunity to a couple of youngsters who have clearly caught his eye during pre-season.

And with only three games left before the big kick off it will be interesting to see how much time he gives exciting Nathan Holland and Sead Haksabanovich (right) over the next three games.

These two have featured regularly in the opening three games against Winteruhr, Wycombe Wanderers and Preston North End.

In total Holland has received 125 minutes of action and the Swedish born ‘Haksa; 115 which has come as something of a surprise to some.

But it demonstrates that the manager is a lover of quick and skilful players and that their futures now appear to be around the first team rather than being put out on loan.

And all the certainties around Robert Snodgrass’ likely departure look to be fading after the midfielder completed 90 minutes at North End this weekend taking his total game time to 210 minutes over the three games.

However, with Felipe Anderson, Chiek Kouyate and Chicharito to be given time following their return to training today there will be more clues to study as we go into action against Aston Villa on Wednesday evening, Ipswich Town on Saturday and the Betway Cup on July 31.

One comment on “Pelle hands out clues on young duo”