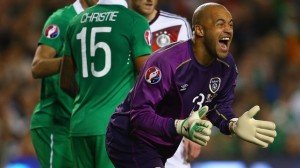 West Ham stopper Darren Randolph kept his place as first choice keeper for the Republic of Ireland and repaid the faith manager Martin O’Neil put in him by keeping a clean sheet.

Ireland beat Switzerland one nil thanks to a Ciaran Clark header but Randolph needed to make one vital save on the 34th minute  to keep Ireland in it and it took an alert Randy to save a deflected Xhaka effort from the edge of the box.

Randolph has represented Ireland at U15, U16, U17, U18, U19, U21 and senior levels. He was called up to the Republic of Ireland senior squad for the first time in March 2011 for a game against Macedonia. He was again called up in May, for games against Northern Ireland and Scotland in the Nations Cup but did not feature.

Randolph made his full international debut in a friendly against Oman on 11 September 2012, coming on as a substitute. His patience paid off.

Randolph’s father was born in Florida and was a basketball player and he once considered representing the United States between the sticks before committing to Ireland.