Ravel pleads for way back to West Ham 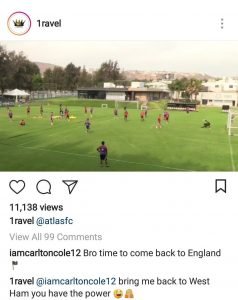 Former Hammer Ravel Morrison has pleaded his former teammate to bring him back to West Ham if he has any influence.

Carlton Cole who was at the West Ham Players’ awards last night messaged Ravel on social media saying ‘Bro, time to come back to England’

Ravel replied ‘Bring me back to West Ham, you have the power’

While the exchange was obviously tongue in cheek Morrison is known to be unhappy abroad and desperate to return to the U.K. His move to Lazio has been disastrous and is currently loaned out to Atlas in Mexico.

The 25-year-old scored five times for the Hammers from 24 appearances. The former Manchester United midfielder joined West Ham in January 2012 as a 22-year-old  costing £1m in fees and appearance bonuses.

← Arnie scores a hat-trick!
Poll: Who do you want in charge at West Ham next season? →
Click Here for Comments >

4 comments on “Ravel pleads for way back to West Ham”