Remembering the 96 who never came home

Twenty five years ago today 96 football fans attending a FA Semi Final between Liverpool and Nottingham never came home with another 766 suffering injuries.  That same day 14,766 football fans were at the Boleyn ground including myself watching Southampton beat West ham 2-1 when the tragic news spread throughout the terraces.

This is a day where all football and all their fans should become united to remember that tragedy.

I understand Arsenal will hold a period of silence and lay a red wreath just before kick off at 7.45pm tonight to remember the 96 fans who lost their life.

Last year Liverpool boss Brendan Rodgers thanked West Ham fans for their “brilliant response” to the anniversary of Hillsborough when Liverpool played West ham on the Sunday before the Anniversary. He said “I’d like to say well done and congratulations to them. I thought it was a brilliant response. Sometimes in this world you get a lot of ignorance and that was a real mark of respect.”

Hugh and myself would like pass on our own condolences to Liverpool and their fans on behalf of Claret and Hugh. 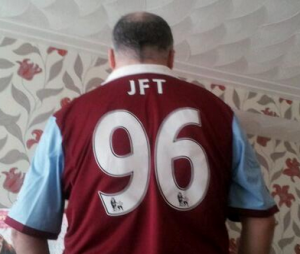