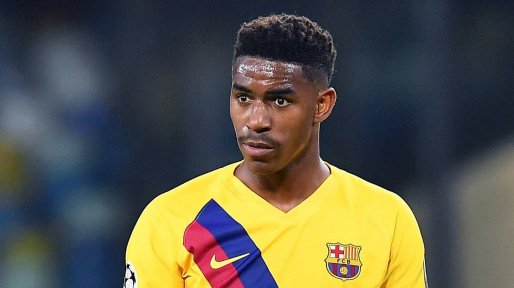 West Ham are being linked with Barcelona full back Junior Firpo according to the  Catalan tabloid Sport!

It’s claimed he is no longer part  of Ronald Koeman’s plans and is set to be sold with the Irons speculated as ever being an interested club.

Firpo though has played only 800 minutes of football across all competitions this season and that a move to us may well be on the cards.

However, at a fee of €20m, this all sounds like a piece of nonsense dreamt up by the Sport on a slow news days.

The Hammers have been linked with this guy in the past notably when his agent claimed he had had  offered him to the Hammers, and the player was  keen on the move.

Then, four days later, it was claimed that West Ham could put a ‘more attractive offer’ on the table for him.

It’s unlikely, based on what we already know from Moyes’ targets, that a left back is high on his list of priorities.

He is looking essentially for a striker, possibly two and is a guy who generally goes into the Championship for his buys.

That Firpo’s agent offered him to the Hammers apparently and that he wanted to come is all well and good but there was little interest from the club.

One comment on “Report: Barca left back linked to Hammers”