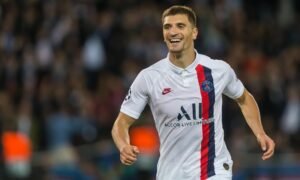 West Ham have allegedly been joined in a race for Belgian right back Thomas Meunier by Spurs.

Both the Express and Football:London have claimed the Paris St Germain free agent is wanted by us and the north Londoners.

However, despite being a free agent, it remains unlikely the Hammers would want to add the player to a wage bill when Ryan Fredericks, Ben Johnson and Jeremy Ngakia are all available to fill the position.

However, should the Hammers decide to make a move Meunier would  prove a good acquisition given he has made 40 international appearances for what is an extremely good Belgian side.

The report comes from L’Equipe who have been tracking the story for some time so this is not one to rule completely out of the question.

There can be little doubt that Fredericks has been very inconsistent since his arrival from Fulham on a free and regular injuries have also been a serious bugbear.

He is going to find it difficult to get past  Ngakia should the season resume and there can be no question that Johnson will be pushing hard for a place in the team.

Meunier us a top quality operator and were the Hammers to move in and be able to afford his wages he would be a great addition but it seems to us they are more likely to be looking for a left sided operator at this point.

← Gerrard ready to blank the Irons
Spitting and nose snorting? Just do the right thng NOW →
Click Here for Comments >