Posted by Sean Whetstone on June 2, 2018 in News, Whispers 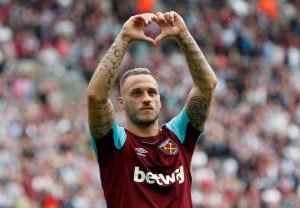 The report claim that the Toffees boss Silva has the backing of football director Marcel Brands, however, the article seems highly speculative without any real substance. Earlier this week Manchester United were linked with a £50m bid for the Austrian Hammer on the basis that Jose Mourinho watched him play against Russia in a friendly and he previously played for him at Inter Milan in 2009. Mourinho later played down the visit claiming he was just in Austria on holiday and not to scout any player.

West Ham says they has been no formal enquiry for the 29-year-old Hammer and absolutely no bid has been received for the Hammer of the year.

They say firmly he is not for sale at any price!  In reality, we all know every player has a price, a bid of £75m would be hard to turn down but the chances of Manchester United or Everton paying £75m for a 29-year-old seems ridiculously unlikely.