A new report suggests West Ham will have to pay up to €20m (£16.8m) to sign Filip Kostic this summer.

The Hammers are interested in doing a deal for the Eintracht Frankfurt wing-back. 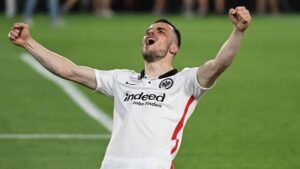 No deal has yet been agreed, however, with the two clubs having held talks over the Europa League winner.

Frankfurter Rundschau, a local news outlet, claims the Irons have made a bid worth €15m (£12.6m), which falls short of the Bundesliga club’s demands.

However, the German side are said to feel that the price can be negotiated upwards to closer to the £16.8m they are demanding.

Kostic is not said to have made a decision over his future yet, however.

While the Irons have made him an offer that would see him double his salary, he would also need to turn his back on Champions League football, after Frankfurt qualified by winning the Europa League.

The ball is firmly in his court.