Pep Guardiola is a big fan of Declan Rice and could sanction a bid in the summer, according to a new report.

The Daily Mirror carried the England international’s quotes after he spoke about wanting to win the biggest trophies, and play in the Champions League. 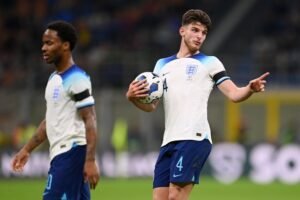 They also claim that there is plenty of interest from the Premier League big guns.

Chelsea, of course, are being linked, as are Manchester United, although the latter would need to qualify for the Champions League to have any chance of signing Declan.

Liverpool are also said to be keeping a watchful eye on Declan’s situation but Pep is said to be a major fan of the Irons skipper, and could look to sign him next summer.

It would be a surprise move, of course, given that City already have both Kalvin Phillips and Rodri, but one has to think that City are keeping an eye out just in case a major rival makes a move.