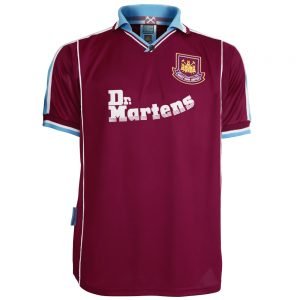 ITK EXWHUEmployee is suggesting that West Ham supporters should wear a retro shirt at the next home game at the London Stadium against Southampton to show support for the team in a united front of solidarity behind the players.

EX explained to C&H this morning: “basically in a nutshell, I am fed up with the way our fanbase is so divided at the moment and it really isn’t the West Ham family I fell in love with where no matter what went on, on and off the pitch, we were always known for our amazing support which I
first discovered at my first ever away game (FA cup semi against forest where we lost 4-0 and the fans didn’t stop singing billy Bonds Claret and blue army)”

“I have been playing with a few ideas how we can unite and the idea of wearing retro shirts and trying to show our support for the team for ninety minutes came into my head! Whilst some people will laugh and not see the point for me the message is clear: look at our history and our heritage (hence the retro shirts), look at the sea of Claret and blue and our passionate loyal support. We support the team and we deserve a lot better than we are getting from the managers, players and board. Of course, if people don’t have a retro shirt the last shirt at the Boleyn still gives that message! Whether you are board out or board in getting relegated helps no one and currently our the fans who were against the boat in the Burnley game have given too many people an excuse to use us as scapegoats! We have made our point against Burnley now for 90 minutes let’s show what fans we are and stop other clubs laughing at us! Then if at 90 minutes people still want to protest then do so but let’s do all we can to get the result‘