Safe standing to be debated in parliament 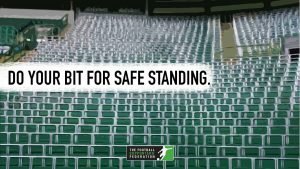 Safe standing at football grounds in England is set to be discussed in Parliament this afternoon.

The campaign to re-introduce standing to the top two leagues of English football has become a huge talking point this year, with a petition regarding the issue gaining over 112,000 signatures.

Supporters are looking for laws preventing standing areas to be relaxed, and for measures to be brought in to allow clubs to implement standing back into football.

The ban on standing areas came in following recommendations made by Lord Justice Taylor in his inquiry following the deaths of the 96 Liverpool supporters in the Hillsborough disaster in 1989. But the introduction of rail seating is seen as a major step forward for supporters who wish to stand at matches in a safe fashion.

Rail seating has already been fitted at Scottish champions Celtic, as well as a number of Germany clubs including Borussia Dortmund, Werder Bremen and Wolfsburg. Clubs in the Premier League and Championship are currently required to be all-seater, while League One and Two clubs can implement standing depending on what stadium licence they hold.

In 2016 West Ham Chairman David Gold said: “I believe that some time in the future the London Stadium will have an area of rail seats (safe standing) dg”

2 comments on “Safe standing to be debated in parliament”