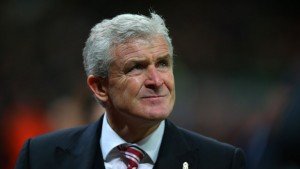 Stoke boss Mark Hughes’ comments that his team found the London Stadium surface “slow” have been dismissed by Hammers insiders.

The remarks raised what some – including ourselves – felt may have been a significan point when the  City boss said: “Maybe the pitch is a little bit slow; whether that’s by design I don’t know.

It didn’t help with our good passing and tempo and how we want to play. I would imagine West Ham feel the same. They also want to get it down and play.”

However, sources inside the club revealed to ClaretandHugh that the club had made no special arrangements to slow things down on the surface.

We were told: “The very latest technology is in place at this ground and it is all very tightly controlled with no chance of over-watering before or at half time.

“It’s quite the equal of Wembley or the Emirates – if not better.”

Hughes also had words of hope for the Hammers when commenting on the new stadium adding: “Clearly it’s not a football-specific stadium.

I had to put contact lenses in to see to the far side. It’s a fantastic opportunity: some people don’t like change but it’s a fantastic stadium, they will be fine.”