Tomas is a Hammer 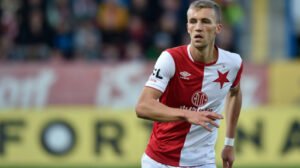 Central midfielder Tomas Soucek has completed his medical in the UK and agreed to personal terms to become David Moyes’s second signing of the January transfer window.

The 24-year-old is on his way to the London Stadium on Tuesday night to sign his contract and complete a photo shoot and video before being unveiled officially as a Hammer in the next 24 hours.

The official confirmation should come on Wednesday with the player reported initially signing on loan with a large loan fee with an option to buy taking the total amount to around 20 million Euros.

Soucek has scored 10 goals in 19 appearances for Slavia this season.

“He fits the profile of the player I want”  Moyes told reporters today at Rush Green when asked about Soucek.

“At the moment he [Soucek] ticks a lot of boxes. We need to give him an opportunity and time to settle in.”

‘I said I want to bring young players but we also need experience too and I think at the moment, he helps with both of those.

‘He’s captain of Slavia Prague, he’s played defensive midfield but scored a lot of goals as an attacking midfielder too.

‘We needed a bit of it all, some cover, another midfield player, obviously goals, so at the moment he ticks a lot of boxes.’

26 comments on “Tomas is a Hammer”