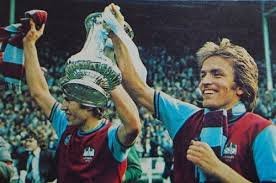 The 1975 FA Cup Final was the 94th final of the FA Cup. It took place on 3 May 1975 at Wembley Stadium and was contested by London clubs West Ham and Fulham. The Fulham team contained two former England captains in former West Ham captain Bobby Moore, making his last appearance at Wembley, and Alan Mullery.