Was West Ham kit won in a bet with Aston Villa?

Posted by Sean Whetstone on September 15, 2019 in News, Whispers 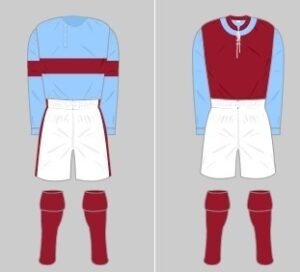 In 1899, there was a fayre was being held near to Villa Park in an area known at the time as the ‘Black Patch’, where a travelling community welcomed attractions One visitor apparently challenging all comers, was William Dove, a London-born professional sprinter of national fame.

Along came four Aston Villa players to the fayre one day strutting their Victorian stuff through the side shows and attractions.The Villa players were challenged to race by Dove which they agreed and a money wager was set.

The London sprinter returned to the capital with the claret and blue kit of the then league champions.

William’s son, Charlie Dove, was an apprentice riveter who played right-half for his works team, Thames Ironworks. The then amateur team had played in a number of different colours, including dark blue, inspired by the firm’s chairman, who had been at Oxford. When William Dove, who also helped coach the team showed up one day with a complete set of claret-and-blue Aston Villa kits, they adopted it. When Thames Ironworks were disbanded and relaunched almost immediately as West Ham they kept the Claret and Blue strip.

Urban myth or true? Another version of the story says West Ham coped Aston Villa as they were the best team in the country at the time but we prefer the wager story ourselves.

One comment on “Was West Ham kit won in a bet with Aston Villa?”