Posted by Sean Whetstone on September 14, 2016 in Whispers 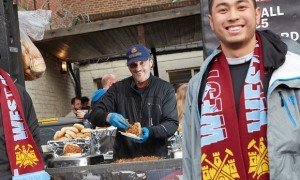 West Ham season ticket holder, Mark Gevaux better known as the Rib Man won the Best Street Food for his £7 pork rolls (“lovely piggy goodness”) he serves with his trademark Holy F##k sauce, which will soon be exported around the world.

He shared the awards ceremony stage at the Hippodrome Casino in Leicester Square on Monday night with a star-studded list of London’s culinary talent across 12 categories.

The former butcher who has a stall in brick lane says he is adamant that he is not looking for a permanent site – he’ll remain a one-day-a-week operation, plus a pre-match treat for fans at West Ham home games.

The West Ham fan runs a membership scheme for his famous rib rolls and beer at Truman’s brewery in Hackney Wick, a stone’s throw away from the London Stadium.